The 2012 High Park Fire, and the 2013 flood (it doesn't get a fancy name, it's just The Flood), underlie every thing that happens here in Rist Canyon. Neighbors who decided to rebuild post-fire are slowly returning, families are still fighting with insurance companies, and parts of Buckhorn Canyon are still impassable after the roads washed away. A plague of locusts is wryly predicted this year. We and many others have received dire-sounding letters from our insurance companies about fire mitigation steps that must be taken OR ELSE.

Even though our house survived both fire and flood, the wet ground saturated the bases of our many dead, burned trees and weakened them into mush. Ever since last September, we've been hearing the crash of falling trees in the woods, sometimes really close by and sometimes resulting in inconveniently blocked trails. The trees would have fallen eventually, but the flood has hastened it.

Today I took a walk with Foley into the lower part of the woods, by the mill site where the logs for the house were milled back in the late 1970s. The site was still intact when we visited in April 2012. Now it's an array of charred things - axles, cinder blocks, fencing, mysterious hunks of iron. The fire burned hotly there. There were so many trees down that the usual walking path was impassable. 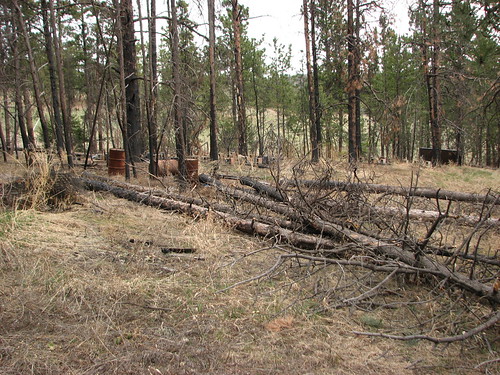 Oil drums, cinder blocks, an old solar water heater panel, and a lot of trees that fell since last fall 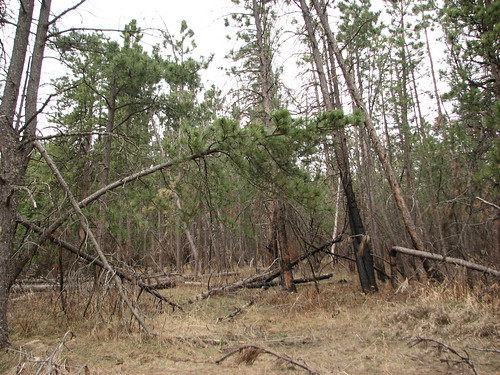 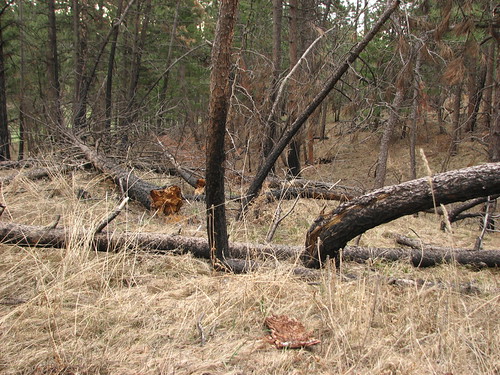 Dead, burned, flood-weakened trees break off at their bases 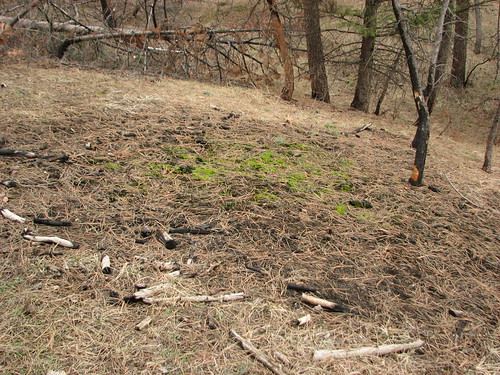 Blackened circles of ground, usually where a treeful of needles burned hotly, are starting to be filled in with moss, an early successional plant that will help to reestablish organic matter in the soil 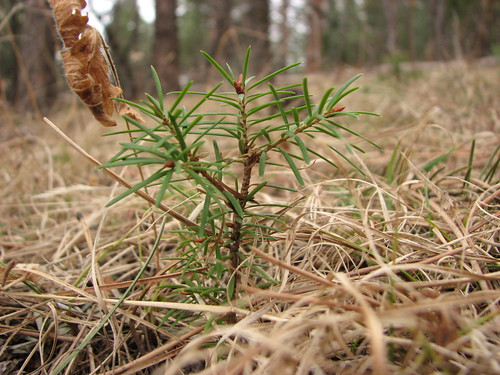 I saw lots of baby Douglas-firs. Doug-firs are not shade-tolerant, but the fire opened up areas of the Ponderosa-pine-dominated canopy and has provided opportunity for the Doug-firs to spring up. These seedlings are a reminder that the fire is part of the normal ecology here, and someday the forest will return.
Posted by Diane at 6:29 PM